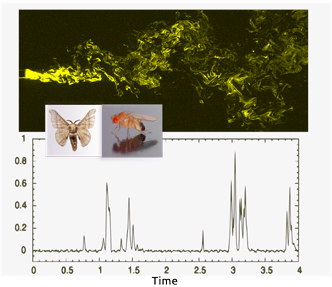 The olfactory system of male moths is exquisitely sensitive to pheromones emitted by females and transported in the environment by atmospheric turbulence. Moths respond to minute amounts of pheromones and their behavior is sensitive to the fine-scale structure of turbulent plumes where pheromone concentration is detectible. The resulting signal of pheromone detections was qualitatively known to be intermittent and sporadic and we obtained quantitative characterization of its statistical properties only recently. On the one hand, we are exploiting such information for the design of olfactory stimulators, reproducing physiological signals in well-controlled laboratory conditions. On the other hand, we are currently considering more general situations where adsorption effects are important. 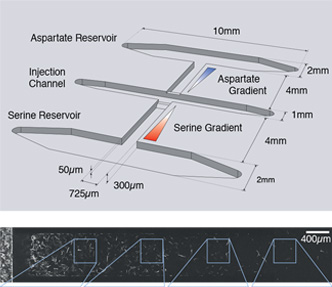 Bacterial chemotaxis for the model organism E. coli has been extensively studied at both molecular and behavioral levels. The bacterium swims in roughly straight lines (running) and randomly reorients its direction (tumbling). By modulating the frequency of tumbling as a function of the environmental chemical concentration sensed by the bacterium, the chemotaxis molecular pathway is able to bias the bacterial trajectories and drive them to more favorable environments. A striking feature of the chemotaxis pathway is precise adaptation. Namely, as a step stimulus of aspartate is applied, running times relax very precisely to their pre-stimulus values. Adaptation is widely believed to be essential for efficient swimming in a broad range of chemical concentrations. However, chemotaxis is not adapted for some other chemicals, e.g. serine, in spite of the same pathway processing the information sensed by specific receptors. This simple fact underlines that, although molecular aspects of the chemotaxis network are well characterized, we have yet to understand its functional aspects, for instance the function of adaptation. Another major question of current interest concerns the ecological conditions of natural selection for the chemotaxis pathway. These are the questions we are addressing through a coupling of modeling and experimentation. 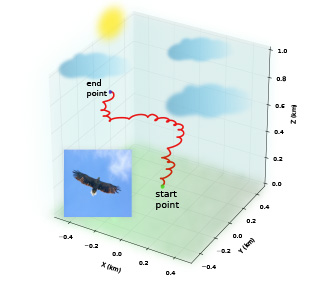 Migrating birds and gliders use warm air thermal columns to cover large distances while minimizing the energy cost of propelling themselves using flapping or engines. Strategies that effectively utilize these convective currents are complicated by strong turbulent fluctuations that accompany them. A bird soaring within such noisy environments has to explore to identify and then exploit the large-scale fluctuations by sensing local quantities. We use modern machine learning techniques to find effective soaring strategies for gliders flying within complex, turbulent flows. Results advance understanding of how birds do it and is also applicable in the development of autonomous flying vehicles. 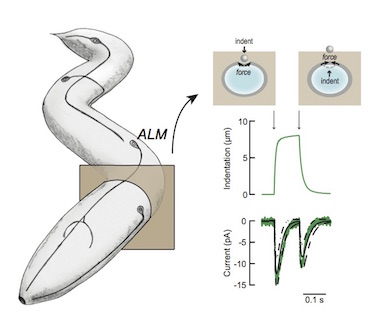 Neurons responsible for touch sensation are embedded into the tissues close to the external surface of the body. They convert external stimuli into neural signals thanks to specialized ionic channels that are mechanically activated yet the channel gating mechanism and the role of tissues are not understood. We investigate these phenomena in C. elegans touch receptor neurons that, like Pacinian cells and Meissner corpuscles in humans, show fast adaptation to sustained mechanical stimulations and symmetric response to the onset and release of an applied force. We use techniques from statistical mechanics and theory of elasticity combined with experimental data on the nematode to analyze the different aspects of the problem and how their interplay shapes the neural response.